To win our domestic world championships round probably is every driver’s dream but to win this rally requires courage, self-confidence, good performance of the car, good set up of the car and furthermore the driver must be relaxed. I was fifth in the qualification and I wasn’t completely pleased with the set up of my car. On the first actual stage I was the second fastest. The set up was still bothering me but I started to attack right away though because I didn’t want to lose the race at the beginning like in two previous years. On stage two (Torittu) there was a crest in a right corner and I didn’t realize that the car would jump but it did. The car went in the air and slid slightly off the road (20cm) and the rear left tyre hit a big rock. The rear suspension broke right away. I was able to limb to the finish of the stage but the rear left a-suspension arm was broken. I tried to support the arm with a charger belt which lasted the next two stages but after that we had to retire. Due to rally2 rule we were able to continue the race but we had 20 minutes’ time penalty. A huge disappointment, of course, but now I had a chance to test the set up for the future rallies. I drove good times and I even got one point from the Power stage. Sebastien Ogier won once again, Thierry Neuville, who drove a very good race, was second and Mads Östberg took the third place. No Finns on the podium! The same happened ten years ago – statistical defeats?! 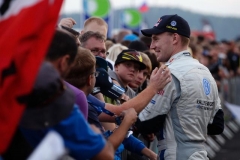 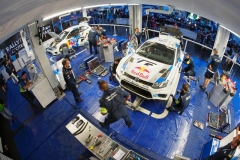 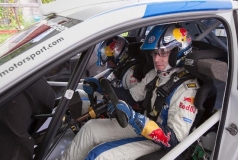 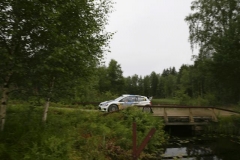 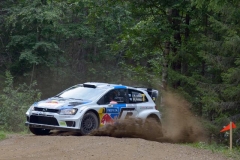