This year’s rally Monte Carlo was a race to be forgotten because of the almost constant rain, slippery and icy roads. The rally was more like battle to survive than rally racing. The weather forecast failed and the tyre choice went wrong. The stages were the same as they were some ten years ago and the rally HQ moved from Valence to Gap (Ogier’s home area). There were 15 stages (together 1396, 76km). It was raining heavily when the rally started. The stages of the first day were driven twice. We were told that there would be snow only up on the mountains (1 700 m from the sea level). That was why we started with the tarmac tyres not even the spare was a snow tyre as planned at first. At the beginning of stage one it was sleeting, after ten kilometers it was a snowy winter. Never had I driven with slicks on snow before so I drove as carefully as I could. Stage two went better because it was icy only here and there. The last part of stage three was winter again. In the afternoon I took winter tyres and rose from position 18 to position seven. In the afternoon I was five minutes faster on a stage of 26 kilometers than in the morning. Almost every top driver made the same mistake with the tyres. Sebastien Ogier was 1, 19 minutes from the lead in the morning but only 47, 3 seconds behind when the day ended. Bryan Bouffier was leading and Robert Kubica was second. They both had the advantage of starting the race much later than us. On day two there were five stages (Faye was driven twice). It was raining almost the whole day which meant puddles and water running across the roads. There was also ice and slush on the stages. In the morning the balance of the car was not good enough, tyre choices were a bit false and we had a puncture (stage 9). I damaged the tyre in a crossroads that I didn’t notice and Miikka and I had to stop to change the flat tyre. I dropped to the eighth position but was able to get the fifth position before the next night break due to the fastest time I drove on the last stage of the day. Kubica had to retyre and Ogier had taken the lead. He was 51, 1 second ahead of Bouffier. Kris Meeke was third. I was over six minutes behind the lead. My aim in the rally was the fifth position. Last year I was fifth before I went off in Col de Turini. This time I made sure that the stages of the last day went without any problems. The last day started in the daylight and was finished in the evening in the dark. And what happened? Col de Turini was packed with snow, the first car was stuck, the other cars formed a line there and the whole stage had to be cancelled. We saw the yellow flag only when we entered the place where the line was. It would have been nice to hear about the cancelling earlier because the stage was so bad. There was so much snow it was difficult to know which way the car will go no matter how slowly I drove. The last stage (The Alps Maritimes close to Monaco) was driven late in the evening when it was dark. That stage was the power stage and I won it taking three extra points. I was fifth in Monte Carlo but fourth in the series. A fine start, easy to continue the series. Ogier won the rally, Bouffier was second and Meeke was third. 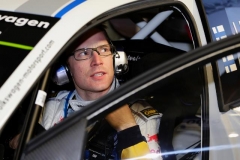 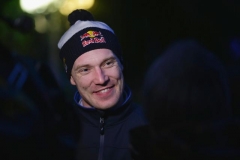 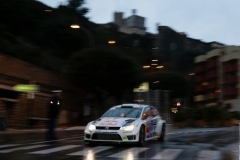 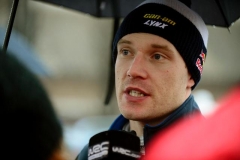 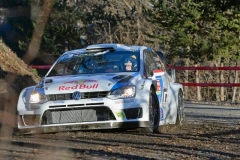 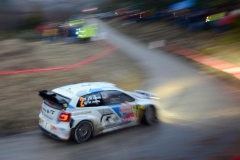 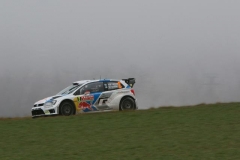 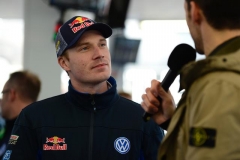