After the Arctic Rally my intention was to drive in Savonlinna but unfortunately that did not happen due to timetable difficulties. Luckily this category F event in Korpilahti was found as a replacement. It was nice and warm because the sun was shining and there was lots of snow in the forests. Of course the sun made the roads soft which gave us a bit more challenge. There were bad lines on stage one and the snow beside the lines was mushy. It was really challenging to drive. If once went off the lines the snow banks were calling. Luckily the snow banks were so high that I stayed between them and on the road – the sides of the car became dented though. Stage two, Oittila (a familiar Rally Finland stage), was better than stage one but there was some slush on the road and I was unable to make my car run well. Stages three, four and five were all old Rally Finland stages ( Vellipohja, Leustu and Moksi). In Vellipohja I found a good feeling because I had enough patience to keep the front of the car in the line and follow the line. Both my co-driver Juho Hänninen and the clock liked my driving. After the last stage Juho stated that had I driven like that in the 2019 WRC I’d be driving there even today. Winning the overall in my first category F rally ever was a good result. Joonas Lindroos, who drove a BMW, became second. 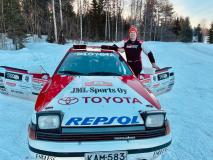 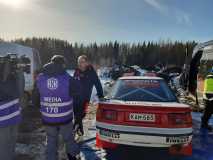 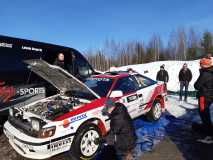 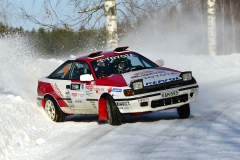 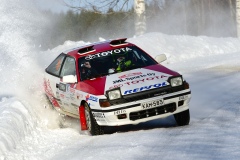 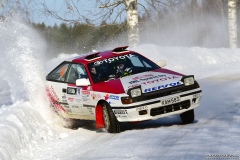