In October 2022 I drove my first official race on tarmac with my  Toyota Celica ST165 and the race was Rally Legend in San Marino. My co-driver for the first time was Janne Ferm so new experiences were ahead.

The first stages were driven in the dark and, unfortunately, the lights of the lamp pod on my Celica were not as effective as the ones in the rally cars of today which gave me more challenge. I even tried to peek over the bonnet once and a while to see better. I do not know if it was the darkness or maybe I was driving too fast but on stage two I drove straight onto a hay bale in one of the chicanes. The bonnet and the bumper were damaged but luckily the lamp pod was okay. My co-driver Ferm did not exactly praise me!

The second day of the race went much better because I started to trust the car more and I also softened the rear suspension to get more grip while braking.

During the day I raced Andrea Zivian who drove Subaru. Every second stage he was faster, but the two last stages of the day were mine. I was able to get more gap between us two by increasing my effort while still staying on the road.

Sunday was the last day of the race and my lead was about sixteen seconds so I could slow down a bit. I tried to drive sensibly, which has not exactly been my style, but now it worked and I won the rally by 8,3 seconds. Zivian was second and Simone Romagna (Lancia) was third. 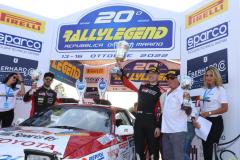 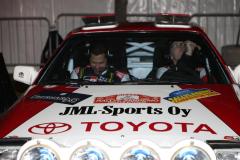 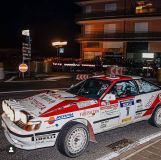 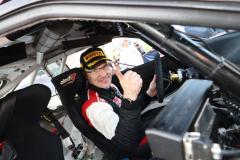