Finally everything started to work out for me in the fourth competition of the season. I was third in the qualification and took the eleventh driving position so that I would have cleaner roads. Dani Sordo was the fastest in the qualification and my team mate Sebastien Ogier was second. Right at the beginning of the rally it was a bit hard for me to find the rhythm and I lost a few seconds on stages one and two but on stage three I got angry at myself and after that my times started to improve. I realized that no more experiences but more results in my new team Volkswagen. After day one I was third, Sordo was second and Ogier was leading. On day two Sordo attacked but drove a bit off and damaged his rear suspension which led to retirement. Now I was second and Mikko Hirvonen third. I tried to leave him but at the end of day two he was only 4,8 seconds behind me. I was able to drive two fastest times which made me breathe easier. I started to make the second place mine on the race during day two because I could not reach Sebastien Ogier and Mikko was properly behind me. Unfortunately Sunday started poorly for me because on the first stage in the third corner the right drive shaft broken and overheated the front lock and the car turned from a four wheel drive into a two wheel drive. Even Ogier had problems with his rear lock but luckily the situation got better. It was a dark morning for team Volkswagen but races were to be fought till the end before the prizes were dealt. I had to drive about 70 kilometers with a two wheel drive but I didn’t worry about that because of my experience in two wheel driven Historic cars. The car was challenging which made me lose about 3,5 seconds and I dropped to the third place behind Mikko Hirvonen but I stayed on the podium. In the service the car was fixed and I started to hunt points on the power stage which was pretty long, 52 kilometers. I almost got two points but my tyres started to wear out and because of that Mads Östberg could drive faster than me and I was left third and got only one point. Ogier won the race and the power stage, too, Hirvonen was second and I was third which was my first podium position for team Volkswagen. 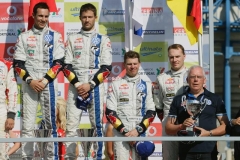 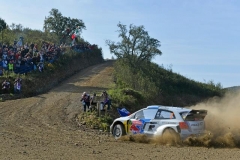 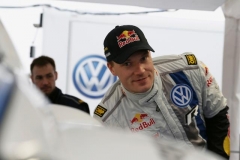 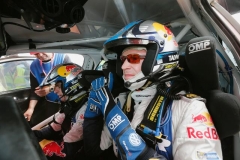 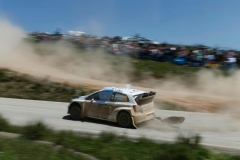 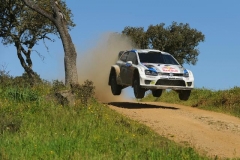