Headquarter of the Rally Germany were moved from Trier to Saarinmaa’s Bostalsee. Traditional part of the route contained roads at the tank training area, Baumholder, but there were only four special stages at the Mosel vineyard area. Most of the special stages that were used before was replaced by fast roads in Saarinmaa.

Start of the rally was tricky for Latvala. He was 13,7 seconds behind rally leader Andreas Mikkelsen and the mood was good. However, at the last stage, 9 km long Waden-Weiskirchen, before the midday service ignition started to act up weird, and Latvala dropped 1,5 minutes behind the leader.

– Grip wasn’t consistent at the morning, but driving was going smoothly. Our plan was to increase the speed at the afternoon, Latvala told.

The car was repaired at the service and Latvala drove one fastest stage time. Latvala started second, 147 km long, leg from the eight place, 1.54,7 minutes behind rally leader, Ott Tänak.

At the second leg Latvala was able to reach 7th place, but difference to the leader shooted up to four minutes because of puncture. There were also some technical issues that caused time loss.

– At the morning I made some mistakes and speed wasn’t too good. At the afternoon I added speed, but at the long Panzerplatte stage we had a puncture. We need to change the tyre and it took two minutes. Remembered Latvala.

At sunday there were four stages, length of 50 special stage. Latvala was at the top three at three of those. Latvala was third at St. Wendeler Land power stage and took three points.

– We hit left front tyre to somewhere at the start of the stage. I thought that we had a puncture and that’s why I wasn’t trying hard, and we almost gone of in one corner. Latvala deplored his performance at the power stage. M-sports Ott Tänak took his first victory at tarmac. He beated Andreas Mikkelsen, who was driving Citroen, by 16,4 seconds. Latvala’s gap to the leader was more than three minutes because of the puncture and technical issues. 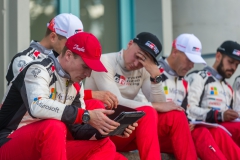 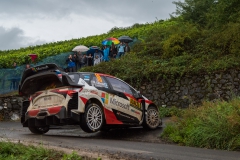 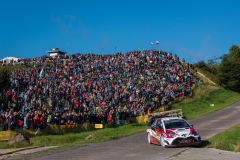 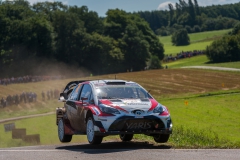 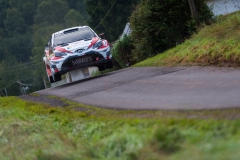 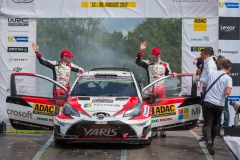