I had been looking forward to this rally ever since 2006. That was the year I drove this rally (in Finnish ‘Tunturiralli’) the previous time. Unfortunately that race ended up in a snowbank in Ristilampi. Now, after 16 years of waiting, I was able to drive the rally with a classic car, Toyota Celica ST185. I drove in a category for old WRC cars because my 1992 Toyota Celica ST185 is not entitled to be in a Historic category yet. The car had been made lighter and better but right away on the first stage in Aittajärvi we realized that the suspension is not good enough on the bumpy and fast roads of Lapland and the power could not compensate for it. However, we had come to have fun and that we had. The power steering belt snapped in two in Siikakämä and I drove for about ten kilometers plus the Mäntyvaara stage as well without power steering. My arms were killing me after that. In the service the belt was changed, the car was okay again and it was time to have the night break. On Saturday morning the first stage was new and over 40 kilometers long, Ahmavaara. After four kilometers a conrod came through the block and that was it. We had to retire. Before the rally we serviced the engine, we put new bearings and pistons but left the old conrods which was a mistake. What seems good on the outside is not necessarily strong on the inside! 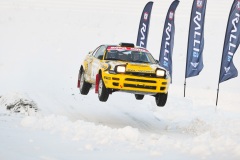 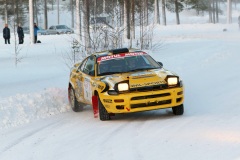 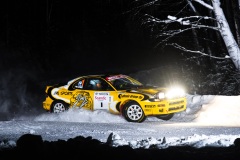