Only one week after Neste Oil Rally Finland I had another race but now I drove a rear wheel drive Ford Escort BDA, a loan from my Dad. Before the rally when I was testing the car its gear box jammed. We didn’t have much time to get new parts and repair the gear box but we were able to get everything fixed before the competition. This was my second time in Lahti Historic rally which is a European championships round and it has pace notes. The first stage was a super special in Lahti harbor on Thursday. It was only 0.5 kilometers long but very technical. Before this stage the car started to run with only three cylinders which gave me a scare. Right away we called the mechanics to change new plugs. They changed the plugs and the engine started to run with all four. The old plugs were dirty due to all the unnecessary starting of the engine. I was fifth on the stage. I drove with gravel tyres while the others had tarmac tyres. The first stage on Friday was 12 kilometers long and the longest of the whole rally. I drove the fastest time by 15.1 seconds so the race started perfectly. All stages on Friday were around Orimattila area except for the super special at the end of the day. It was driven downtown the city of Lahti. I didn’t make any bigger mistakes during the day and the car worked fine. I could smile happily after each and every stage so easy it was to drive and slide the car on good roads. I was the fastest on every gravel stage and the third fastest on the super special in the evening. After Friday I was leading the rally by one minute. Veli-Matti Saarelainen was second and Mika Turkki was third. On Saturday I drove like on Friday nice and easy and smoothly. On Saturday we drove at the Hämeenkoski area. While waiting for the third stage of the day to start the gasoline in the carburetors of the car started to boil but luckily after the start when the engine got new and fresh gasoline it started to run as usual. We only lost about five seconds because of this slight disturbance. We drove six stages on that day and I was the fastest on all of them so after the last stage of the day Asko Sairanen and I were the winners of this rally. We were two minutes faster than number two Veli-Matti Saarelainen who drove Opel Ascona. Mika Turkki was third. I am a professional rally driver so it is obvious I have to be able to drive the fastest times otherwise I would be the wrong man in Ford’s WRC team. This year we were allowed to drive the recce stages only twice (distinguished from the earlier rallies) but for me it was easy because that is the way we do in the world championships series. Of course we drove fast in the race but the most important thing in a Historic rally is that everyone can participate and enjoy driving their old cars in their own way. 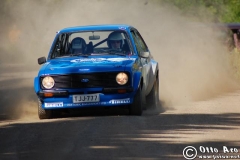 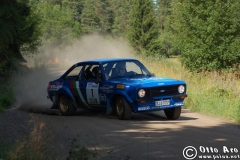 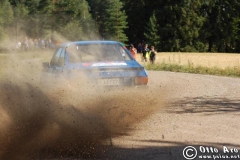 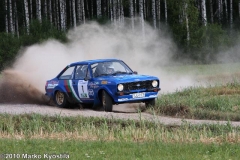 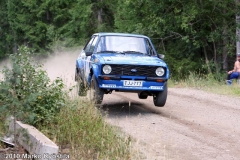 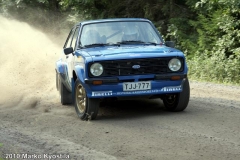