Jari-Matti Latvala ended Rally Poland with victory at the Power Stage and reached 6 points. The compensated saturday’s retirement that ruined the changes for the podium place.

“At the first pass of the Power Stage I took it really steady and raising up the feeling for the second pass. I marked up the tricky places at the first time and at the second pass I made maximum attack. There were couple mistakes, but we get those five points.” Latvala summed up.

At saturday Latvala was in the third place 13 seconds behind the leader when Toyota Yaris ended up to the side of the road because of the clutch and flywheel breakage.

“That was huge disapointment especially when other drivers like Neuville and Tänak had problems too. Without that problem we were able to get the lead of the rally.” Latvala told.

At the Southeast Poland, Masuria area, roads were extremely fast and event was exceptional tricky when there were raining all the time. Especially second pass of the stages were tricky because of mud and ruts.

Latvala lead the rally almost for the whole morning in the first day. At the end of afternoons loop position was third.

“At the morning there were actually quite good grip but it was changing all the time. At the afternoon I had problems with car turning in the ruts. We raised up the car for the afternoon, but not enough, I think.” Thought Latvala.

The gap between rally leader Thierry Neuville and Latvala was 6,6 seconds after the opening day. Ott Tänak in the second position was 5,3 seconds behind Neuville.

Fight for championship is still on

At the saturday the car was easier to drive on the muddy roads, but problem with clutch ruined the changes for the victory.

“At the saturday’s morning loop of stages grip was changing a lot and there were much of ruts. I felt that were driving at the good pace even in the ruts. So the retirement was big disappointment.” Latvala told.

Thierry Neuville won the rally. Winning margin to the team mate Hayden Paddon was 1.23,9 minutes. When Tänak retired, Latvala raised up to the third place in the WRC. He won four stages of the rally.

“There are still changes to fight for the championship!” Said Latvala. 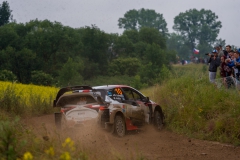 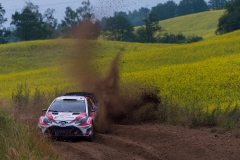 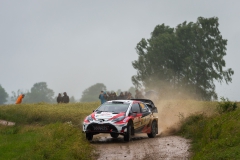 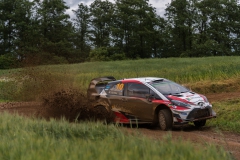 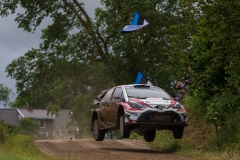 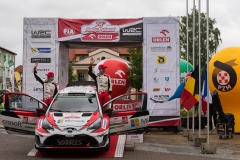