After a break of about two years I was on the starting line of this home rally of mine again but unfortunately I experienced some difficulties right away on the first road section: the clip of the turbo hose came loose. However, I managed to fix that problem on time before the first stage.

Still the car did not run properly on stages one and two because the turbo had broken in the tests and we had not had time to calibrate the spare turbo with the engine. The car nearly died in all the slow places and once even did so for about 20 seconds.

Day number two was rainy but we were able to fix the car in the service the previous night so our spirits were high.

The roads were pretty muddy and very slippery at some places so the driving was not very relaxed. I really had to be awake when braking.

My best position in overall stage times was seventh and in the whole competition I was a few seconds behind position ten but once again I started to experience some difficulties. At first the right driveshaft caused problems and when we got rid of that the car caught fire in the finish of stage seven because the cooling pipe of the alternator had rubbed against the exhaust pipe. I was lucky to put the fire out and we were able to continue our race and started to drive towards the last stage but all of a sudden the car died on the road section just about five kilometers before the start. The battery was empty because the alternator did not work. The fire had broken the charger and I was a bit stressed and had not followed the alternator meter so that problem came as a bit of a surprise for us. So, that was the end of the rally for our part. Emil Lindholm (Skoda) won the Ostrobothnia Rally. 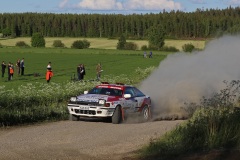 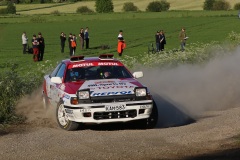