Our Cars – Legendary rally cars from 1970’s to these days

This car is known with model designation st205. It was released at the end of season 1994. This car was driven by Armin Shwarz in Rally Australia 1995. (5th in overall) and Juha Kankkunen in Swedish Rally 1996 (4th in overall). Later on Henning Solberg and Juha Kangas has used this car. I bought car from Lillbacka Group.

Pekka Lillbacka has bought this car at the end of year 1990. Pekka drove with this car 1991-1993. Last rally was Rally of 1000 Lakes 1993. After that Pekka’s brother Jukka Lilbacka has driven two rallies with this car. We bought the car at the summer of 2016 and it took 10 months to built this car. Several parts has been bought from abroad, but now car is restored to the original shape. This car is restored with the original parts from TTE (Toyota Team Europe).

You can see the car in action at Peurunka Rally 2017 from here.

Some Onboard action can be found from this video.

This car has a significant past for it belonged to Toyota Team Sweden. In 1992 Mats Jonsson won the Swedish Rally (WRC) with this car.

Later on the car was privately owned and it participated in minor rallies in Sweden. At some point Harri Joki bought the car intending to equip it with a roll cage suitable for the Historic category. Business and other important matters in his life took Harri away from rallying and he decided to let the car plus the spare parts go.

We bought the chassis (with roll cage in it) and the spare parts in the summer of 2019. It took us about a year to make the car suitable for the Historic category. We used the best parts which were also the latest models and made the car as light as possible. We also took and used all the existing updatings there were for this ST 165 car.

The first rally with this car was driven in Kerava in October, 2020 by Jari-Matti Latvala and Juho Hänninen.

Jorma Aaltonen bought the car and drove it in the 90s. He bought parts from TTE (Toyota Team Europe) and started to change the car into a category A car. Later the car was driven by Tapani Hulkkonen and Ari Nukala.

At the beginning of the 21st century Juha Liukkonen bought this car and I bought it when it had been resting for about 20 years.

We will make the car a category A Replica. Similar to the cars that Toyota had in WRC rallies in 1992, 1993 and 1994.  This will be the car in our passenger drive events.

This car built by Toyota Rally Team was raced in Jyväskylän Suurajot 1992 (now known as Rally Finland) by Marcus Grönholm. That was his first rally with a so-called factory car. Grönholm and Alen drove the same time on the first stage in Harju thus being both the fastest on that stage. Unfortunately Grönholm had to retire on stage five in Vaheri due to a minor driving off the road.

TTE (Toyota Team Europe) built this car for Didier Auriol to be driven in Neste Rally Finland 1999. This car was the third last WRC Corolla of the TTE. People started to call the car “ a snake” in Neste Rally 1999 because Didier had trouble keeping the car straight even on straight roads. There was probably something wrong with the transmission which affected driving. In 1999 there was an experimental TV special stage, today’s Power stage. Back then if you had to retire you were not allowed to continue the race. This rally was an exception: you were allowed to drive that TV special stage.  Auriol retired after the second last special stage and the parts of his car were replaced in the service. He was the first car on the TV special stage so he drove before the rain, won the stage and gained three World Championship points.

The annual model of the car is 1984 and it has been taken to Finland at the beginning of the 21st century. The car has been transformed from a road car into a rally car by Jukka Karjalainen. 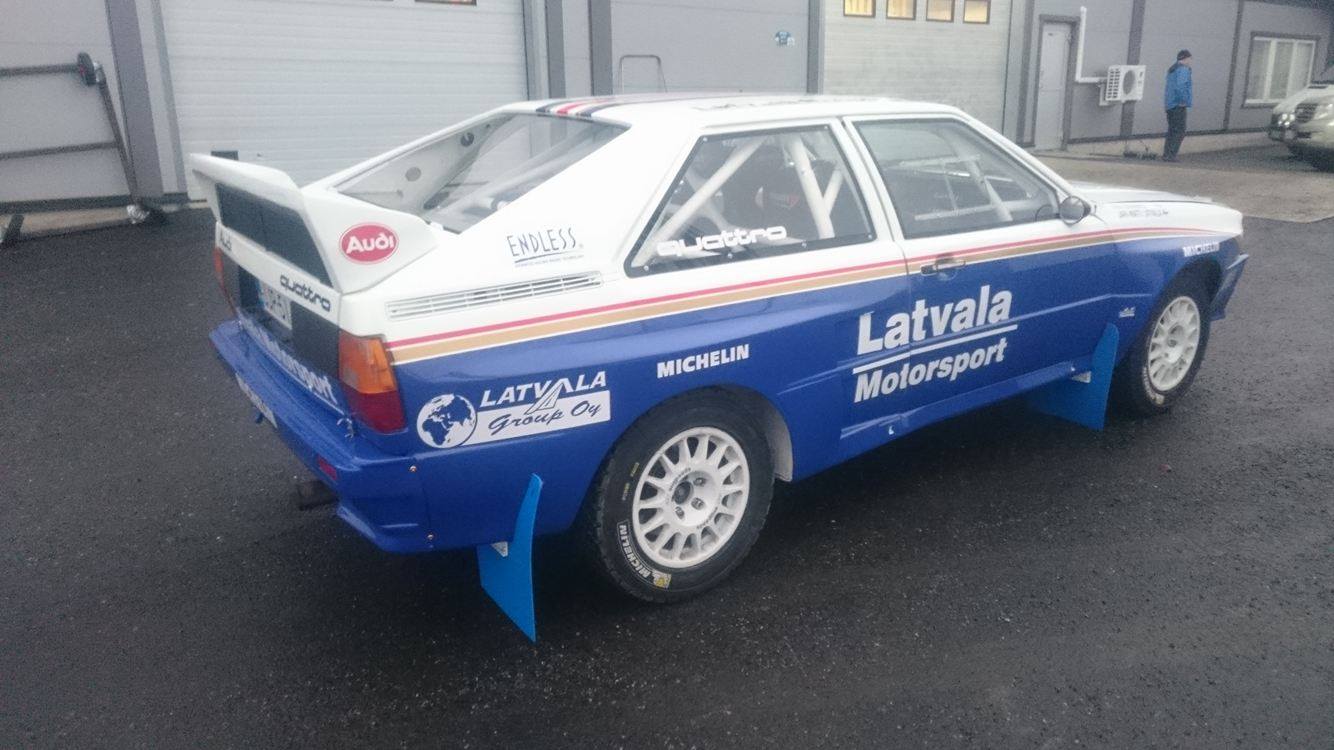 Everyone who has seen and heard Group B rally car in action can’t ever forget those, me neither. I have always dreaming about driving with Group B rally car, that is why I decided to built up one.

I was dreaming of a big Audi Quattro Ur model. And such was found in Germany in 2011, in poor condition though. The chassis was sunburnt and rusty. There were dents on both sides. Luckily a guy called Kimmo Korpela knows what to do with dented Audis. He renovated the car to be an original road car.

The car was built in Sweden. At first it was a front wheel drive (1982) driven by Mikael Eriksson. Later it was changed into a four wheel drive Quattro (1986) driven by Bro Danielsson who took seventh place in the Rally Sweden 1988. He was fighting for the third position but went into the snow at the end of the rally. The car was brought to Finland at the end of 1980’s and it was driven by Kari Kivenne, Jari Viita and in the 1990’s by Tapani and Tuomo Latvanen, just to mention a few of its drivers. The car was driven for the last time in the Pertunmaa Rally 2001. Since then the car was off use because of its poor condition. I bought this car in 2015 for renovation. It was a challenging task, but Kimmo Korpela did it. Model, colour, everything in the car was made to represent the car my father Jari Latvala used to compete with in 1988 – 1989. He bought Lars-Erik Torph’s Audi Quattro in spring 1988. Torph was third in the Swedish rally -88 after a hard battle with Bro Danielsson who drove this particular car now owned by me.

I got this VW Golf GTi 1980 from Volkswagen and Volkswagen Motorsport in 2014.

Mitsubishi built their first WRC car in 2001. The debut of the car was in San Remo, Italy. Later Mitsubishi released a Step2 version of their WRC car which our car represents. The car was bought from the Netherlands in 2013.This car was used by Francois Delecour in Wales Rally GB 2002.

The car was built by Jukka Karjalainen in 2009 and it was rebuilt by Latvala Motorsport Ltd. in 2012.

Avenger was Jari-Matti’ second car, but his first rally car.