This was the second world championships round in Poland. The first was some 30 years ago so this race was new to all the present day drivers. The roads in Poland remind the roads in Finland. They are fast like the ones here in Finland but the surface is softer, they are narrower than the Finnish roads and they run in more open areas. The race started perfectly for Ford when Mikko Hirvonen took the lead on stage three and on stage four Sebastien Loeb hit a stub breaking his front suspension. He continued the race in SuperRally. I was third before stage four but now that Loeb had to retire I was second and Dani Sordo third. On Friday evening Hirvonen was leading by 8.9 second and Sordo was 28.1 seconds behind me. We were to maintain one-two position to the finish now that Loeb had retired but Sordo made it very difficult on Friday afternoon and even harder on Saturday. Dani attacked in the morning and got close to me. He was only 19.5 seconds behind when we reached our day service. I was three seconds behind Mikko. In the afternoon we drove as fast as we could sometimes I felt it was much too fast to drive long legs flat out! In the evening Mikko was 12 seconds ahead me and Sordo 26.5 seconds behind me. It was hard to get seven more seconds between Sordo and me. On Sunday Sordo made another attack but he drove one crossing too long and lost over 20 seconds. After that Hirvonen, Sordo and I eased the situation and concentrated on driving sensibly to the finish. Everything seemed good. All the forest stages had been driven and there was only one super special in Mikolajk left. Before that last stage we had to wait for one and a half hours which was hard for me. Finally the last stage started and all I had to do was to cruise it through but no, that didn’t happen: I cut into a barrel breaking the front suspension and the car touched the railing. I was stuck there and tried so hard to get the car back to the track again that I overheated the clutch which broke into flames. That was it then and I gave the team, the fans and myself a tremendous disappointment. 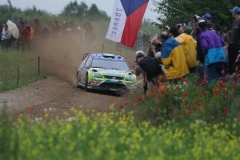 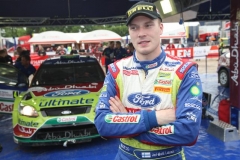 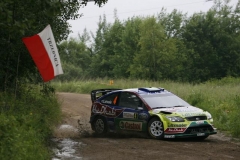 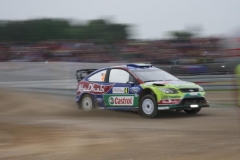 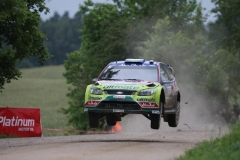 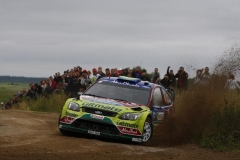 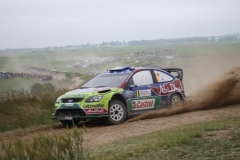 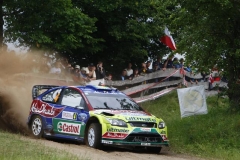 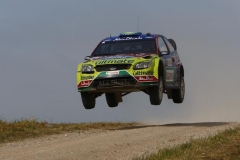 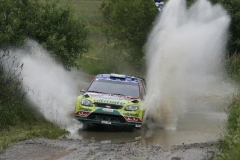 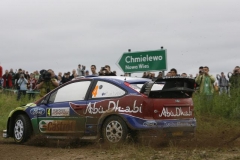 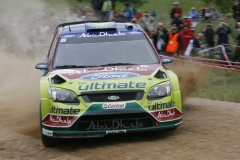 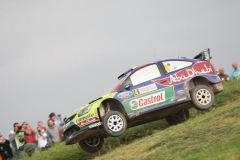